3 LEADERSHIP LESSONS MY HORSE TAUGHT ME.

When I was a teenager I spent my summers working at several horse farms, mucking out stalls, turning horses out to pasture and painting fences.

One of the farms I worked at was a Quarter Horse racing stable full of half crazed, speed demon, yearlings bred for nothing else except to run full throttle straight ahead for 1/4 mile. I fell in love with one 2 year old filly named Three Moore Kristi and asked the farmer if I could buy her. He agreed and by the fall of that year before heading back to school I had saved enough money to buy her and bring her home.

She was an racer and what they referred to as “green broke” meaning she would take a saddle and rider but was not used to taking any direction other than being prodded aggressively to go forward at full speed.

My plan was to spend the summer training her to be an obedient, responsive yet spirited pleasure horse, all the while she was teaching me some valuable lessons.

My green broke horse was stubborn. She had developed habits that were hard to break. She was great for running on a track but not for pleasure riding on a trail or beside a busy road. She had one speed – full speed, but I needed her to walk, stop, trot and canter on demand so I had my work cut out for me. As stubborn as she was, I knew I had to be more so. I also realized that the key to breaking old habits and Instilling new ones was persistence, repetition, a firm hand on the bridle and a kind reassuring voice. I had to be clear on what I wanted her to do and than repeat the command over and over again. I also had to make sure not to confuse or overwhelm her by trying to teach too many things at once.

Who knew that soon I would be able to ride my horse bareback and without a bridle. She would stop with a simple “whoa” command and a tug on her halter. I could steer right or left by squeezing with my leg and leaning right or left. A little “click” sound and she would pick up the pace. A few clicks and a change in seated posture and we’d be galloping through the fields. Together we crossed rivers, navigated valleys and climbed steep trails while balanced on the edges of sheer cliffs. She would listen carefully trying to anticipate what I wanted, relying on me to set the course while I relied upon her intelligence, strength and surefootedness to get us safely to our destination.

Being new to horse training I asked one of the riders for some advice. He handed me a little jockey switch that he used during races. “Use the whip”, he said. “she responds well to a switch on the shoulder”.

I could see an immediate change in my horses demeanor when I walked up to her stall with a whip in my hand. I knew that I would be able to speed up the training process by using the whip, where I had to beg for her attention before I now had it undivided. I could give a command and simply apply the switch or at least the threat of it until I got the behavior I wanted.

However, I didn’t want my horse to obey only under the threat of a switch on the shoulder, I wanted her to want to be a good riding horse, one that I could let my younger siblings ride safely. I wanted her to be aligned with me not because she had to but because she wanted to.

So I threw the whip away and stuck to being firm but kind, persistent but reasonable, stubborn yet reassuring. Just like in business, you can get compliance by threatening someone’s job, but that’s all it will be. Compliance under threat. To keep the compliance you will have to keep the whip in sight. Rather than creating a culture of care where people buy-in because they want to you will create a culture of fear where people comply because they have to. Getting alignment and buy-in from your team takes longer, but it lasts longer too.

GETTING ALIGNMENT AND BUY-IN FROM YOUR TEAM TAKES LONGER, BUT IT LASTS LONGER TOO.

2. Lead from the front

The first time we tried to cross a stream my horse stopped at the edge and wouldn’t go further. She tried to walk backwards, turn around and run away. This was unfamiliar territory and she wasn’t going in. It wasn’t until I got down and led the way that she felt the confidence to step into the stream and cross it. Soon she learned to love the water and would cross a pond or flowing river if asked. The same situation arose when trying to trailer her the first time and leading the way worked again. The same principle applies to business, sometimes you have to get down off your high horse and lead the way.

SOMETIMES YOU HAVE TO GET DOWN OFF YOUR HIGH HORSE AND LEAD THE WAY.

The kind of synergistic bond that I was able to form with my horse was one of mutual respect and trust where each one looked out for the others best interest. This should be our goal in business whether between employee and manager, franchisee and franchisor or any other business relationship. Respect and trust can not be demanded or bought, it has to be earned, and the way to earn it is through genuine care.

RESPECT AND TRUST CAN NOT BE DEMANDED OR BOUGHT, IT HAS TO BE EARNED, AND THE WAY TO EARN IT IS THROUGH GENUINE CARE.

I arrived at the stable one day to find that my horse had broken out into a field of fresh alfalfa. I knew that too much rich alfalfa could cause a horses hooves to heat up and possibly founder – a painful condition that can cause lameness.

For the next three days I camped out at the stable and walked her down to the river and let her stand for two hours at a time, three times a day in the cold river. She recovered and did not end up going lame, and although she couldn’t say so, I believe that in caring for her during her time of need we were able to form life long bond of trust and respect.

Obviously your employees are going to be loyal first and foremost to their families and themselves just as you are to yours. No one will ever care about your business as much as you do, but when employees see that you truly care about them and have their best interest and well being in mind, they will go the extra mile, show loyalty form a strong working 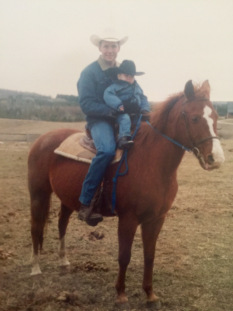 My horse and I rode many a trail together when I was a teen and our bond lasted even until I became a father and had children of my own. They too were able to enjoy riding my gentle and caring horse who started out as a single minded, green broke, one speed race horse.

I believe I earned her respect and trust and in turn she gave her strength, intelligence, loyalty and friendship.